Blips Ultra Lab Kit are lenses designed to work with any smartphone thanks to the adhesive attachment and able to offer enlargements in some cases superior to any kit of photographic lenses for smartphones. We have tried in recent weeks for a judgment of three hundred and sixty degrees on what has turned out to be a simple product, durable and quality. 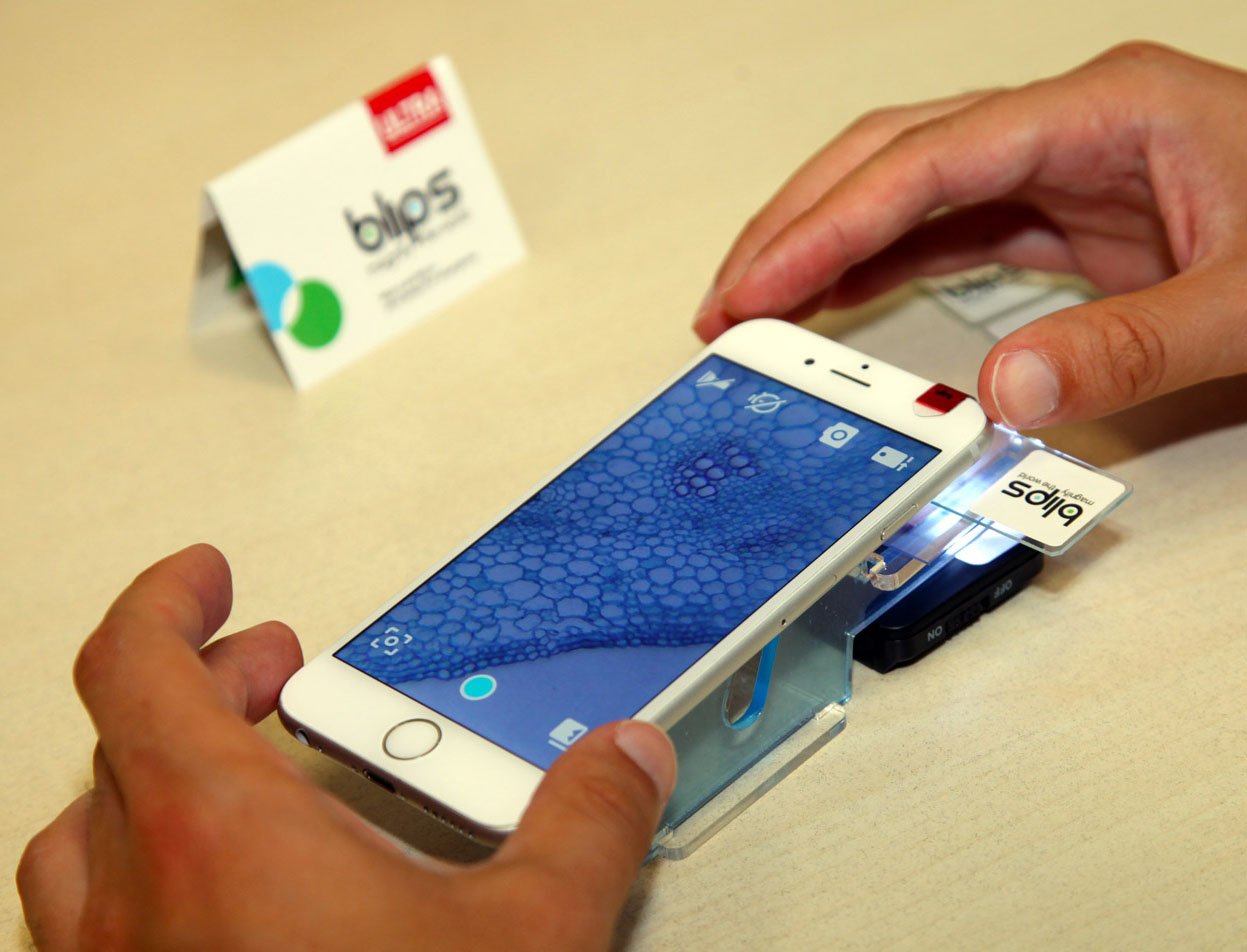 There are three different types of kits. The Basic Kit , where the lenses are simply adhesive. Then there is the Metal Kit , the same that we received on trial, which combines a metal core to the adhesive layer, which is very useful as it can keep the bending when you apply it on the edge of a smartphone. It is ideal with iPhone and other phones where the camera is in the corner.
The company then makes available the Lab Kit which includes 6 slides prepared to immediately look at some small details, a support to keep the iPhone tilted to the right position during the use of slides and a small LED flashlight to illuminate the latter from below , ensuring better visibility when using lenses. 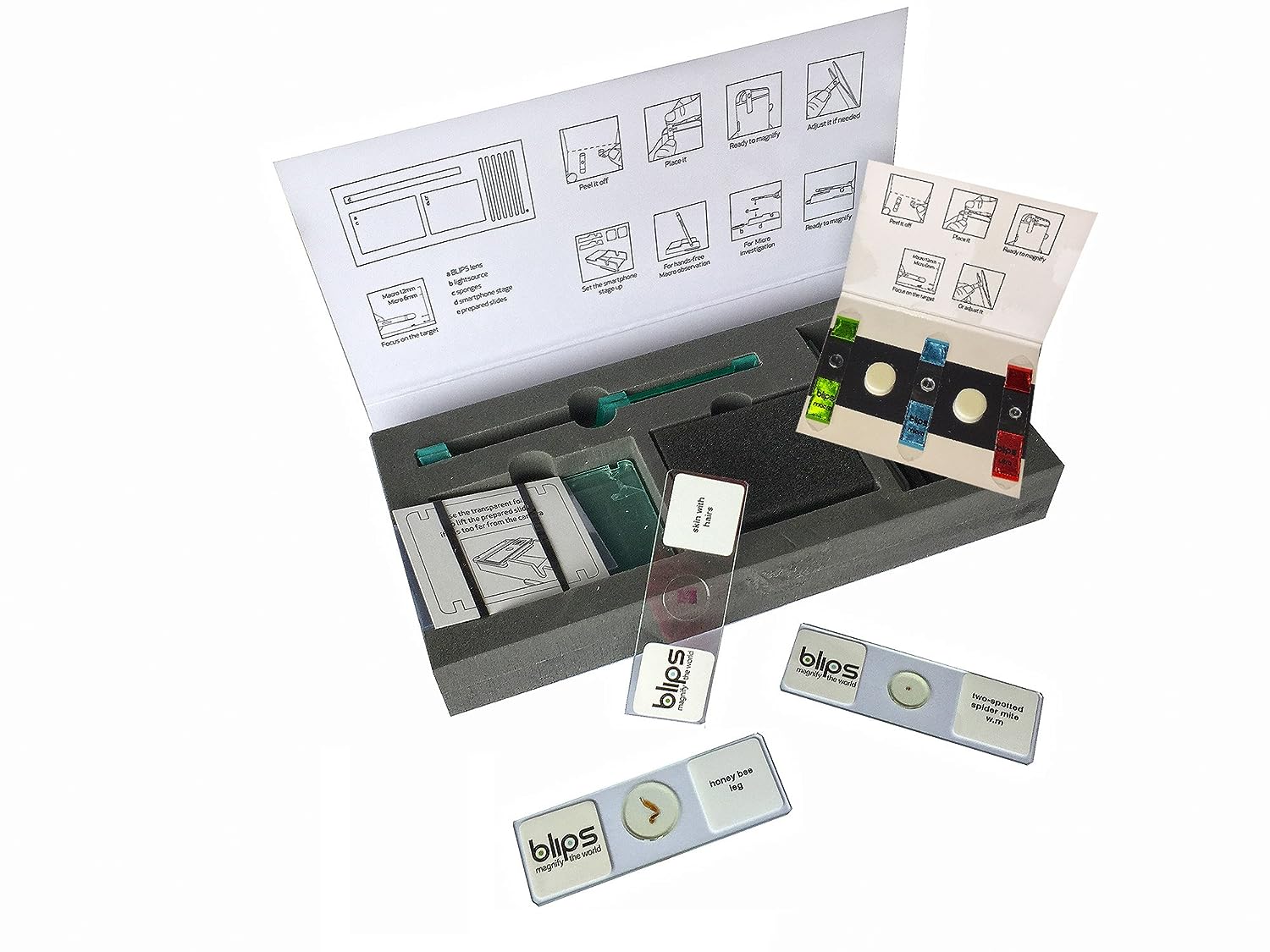 How the lenses are made
The lenses are sold inside a card that can easily be placed inside a pocket of the wallet. It is a really ingenious solution as they take up very little space and we can transport them with extreme ease almost forgetting to have them with us. The package also includes a handy metal case, similar to those that you buy to carry your business cards, in order to store two or more sets of lenses in a single compartment.

As we said, the lens is very small: it is represented by a sort of protruding “bubble”, fixed on a thin and soft strip. The central part of the latter is made of electrostatic material, so it stays firmly on the smartphone, while the two flaps are accompanied by an adhesive-type adhesive layer that ensures better stability of the lens. You can attach and detach many times, especially if you take care to clean the smartphone shell before application. In any case, the company in each kit includes a set of  replacement stickers, to be able to replace them when the adhesive solution loses its initial strength

With this lens the minimum focusing distance is really millimetric, so it is unthinkable to use it freehand. For this reason, the company includes in the kit a support to keep the smartphone slightly tilted, however on the move, if you forget it at home, you can equip yourself on the moment even stacking some credit card

We recommend using the Smo Blips app (for iOS and Android ) developed by the manufacturer as it blocks the focus automatically and offers a number of useful tools to make the most of the lenses with greater magnification with minimum effort.

Conclusions
The strength of this Blips Ultra Lab Kit is the compatibility with the camera of any smartphone and tablet currently on the market. The application is immediate and with a little ‘foresight each lens can be used for “weeks” without ever feeling the need to replace the adhesive layer. The writer has taken them with him to his wallet for more than a month, using them more than ten times and even today the strength of the adhesive is sufficient to guarantee high stability for the next uses.

Because of their compactness, they are in our opinion the best solution to take macro photos on the move. If it is true that there are small and portable macro kits, nothing is so thin that it can disappear in a shirt pocket like this kit, and the speed with which it can be applied to any lens is an added value of the product. The only limit is the wear of the adhesive, but as mentioned there are some spare strips in the package that, if used with care, can guarantee a very long time of use. Should those also end, the company sells them separately